If pictures were words…

…then this would be in the Guinness Book of World Records for the longest blog post in history. I know that in a real daily blog photo project, the focus (pun intended) would be on quality of photos, not quantity, and on culling and editing and perspective. But I’ve realized two things on Day 10 of my self-created project to document our Summer vacation — 1) I’m a writer, not a photographer and 2) this daily stuff is hard.

Friday started as a beautiful, clear and bright blue day, with mild temps following the previous night’s storm. A perfect day for the NC Zoo in Asheboro. I had forgotten some friends and their kids were heading over, but once reminded, made a last-minute decision to go too. They were going early, though, and knowing my night owls aren’t morning people, I decided we’d leave little later and try to meet up with them.

The best-laid plans, however, well, you know how they go. As I finished getting ready, I remembered that none of the three car seats were installed. Our minivan had been in the shop for repairs due to a lovely hit-and-leave-no-note-about-that-huge-dent-in-your-car parking lot incident and I’d just picked it up the evening before, rushing home to barely beat the storm.

After the 30 minutes it took to get all three seats safely and securely (yes, I’m a bit anal about it), packing lunches for four and gathering diapers, cameras, waters and snacks, we were on our way, trailing my friends by 2.5 hours. When we got to the zoo, it was beautiful. I got all our bags and lunch packs out to load into the stroller. Which I unfolded for the first time in seven months. Which was covered in black mold. Apparently, the last time we used it was in November at the — wait for it — zoo. When it rained a steady drizzle the entire time we were there. Also apparently, I forgot to let it dry out. Awesome.

So, there I was, three Hatchlings in tow, three lunch bags, one huge backpack and a camera bag (because I’m doing this summer project where I’m trying to use a real camera more), making the trek from the Disney-sized parking lot to the admissions gate.

So we detoured to the picnic area, which is before you get to the gate, and we lunched. I pulled out my camera to begin documenting this day. No memory card. You’ve got to be freaking kidding me. Not only can I not take pictures of Day 10, I have to carry this useless bag and camera because I’m not trekking back the 20 minutes it will take us to get back to the car with no stroller. I’m not. I dig around in my camera bag and find two old memory cards. One is an 8Gb card, so I take my chances. The first pictures I see are of us when we were a family of four with H#3 imminently due, ironically at the Lincoln Park Zoo in Chicago. I guess we really like zoos. 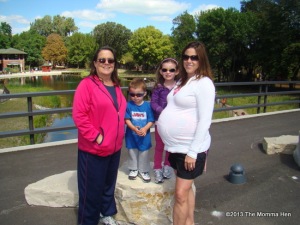 Check out the belly on that chick! 36 weeks prego with H#3 at Lincoln Park Zoo.

I snap a blurry picture just to sere if there’s room and it takes. I’m using it. I’m also crossing my fingers I’m not somehow erasing all those pictures that have been hiding in my camera bag for three years.

Picnicking. Documenting because I MADE LUNCH!!!

So, success. Redemption. Whatever. Then H#2 grabs my camera and starts taking pictures of a cardinal. We’re at the zoo and he’s captivated with a red bird. So much so, that he takes approximately a gazillion pictures of a blur of green with a red center in five seconds.

Okay, so I might have been exaggerating a bit…this one is actually pretty good.

I reclaim my camera, we eat our lunch, and clean up, ready to finally go in the gates at 1:00, two hours after leaving home.

H#3 is in the midst of potty training. This means that at home he wears and uses his diapers 100% of the time, but as soon as we go anywhere in public, he’s suddenly this potty connoisseur, who has to sample every public bathroom. And touch every surface in it. And actually uses the potty about 25% of the time. So off we go to the potty, which is also not inside the actual zoo.

We emerge, mostly successful and somewhat germ-free, and there it is — the gates. There is one gate open to zoo members. No problem because who the hell is actually waiting to come in at 1 when the zoo closes at 5? Us and one other person. And that person is in front of us. And that person is not in the admission worker’s computer. At this point, I can only laugh. And wait. And marvel that, as one friend pointed out to me on Facebook, us parents ever actually make it anywhere with our young kids.

And we had a blast.

On the tram back to our stop that would still leave us about 100 miles from our car, I sat behind a mom with her four young children. Mom was obviously exhausted and just done, and during the ride to our stop, a beetle flew into her daughter’s hair. She flicked it out frantically, knocking it on the tram floor while she yelled at her other daughter to “step on it, STEP ON IT!” which the daughter did as we whizzed by all the exhibits that talked about being nice to our earth and protecting animals and treating even the smallest creatures with kindness and compassion, and Mom hugged her and said, “Good job, honey.”I think it was the dehydration, but I couldn’t quit giggling.

And our day ended with a promised trip to the gift shop, where the Hatchlings got to use some of their birthday money to pick something out. Of course, they chose one more plush animal, because that’s something we don’t have enough of, like crayons and toy cars.

For the record, it’s a coral snake, a cheetah and a squirrel. (A squirrel!!)

But it was worth it.

A boy and his elephant

Plotting our next steps.

…you know the rest.

H#3 was way more interested in this squirrel than the chimps.

Squirrel watching at the chimp exhibit.

Momma gorilla and her baby. I felt a connection to her.

In the arctic, the mighty arctic…

2 thoughts on “If pictures were words…”

Error: Twitter did not respond. Please wait a few minutes and refresh this page.